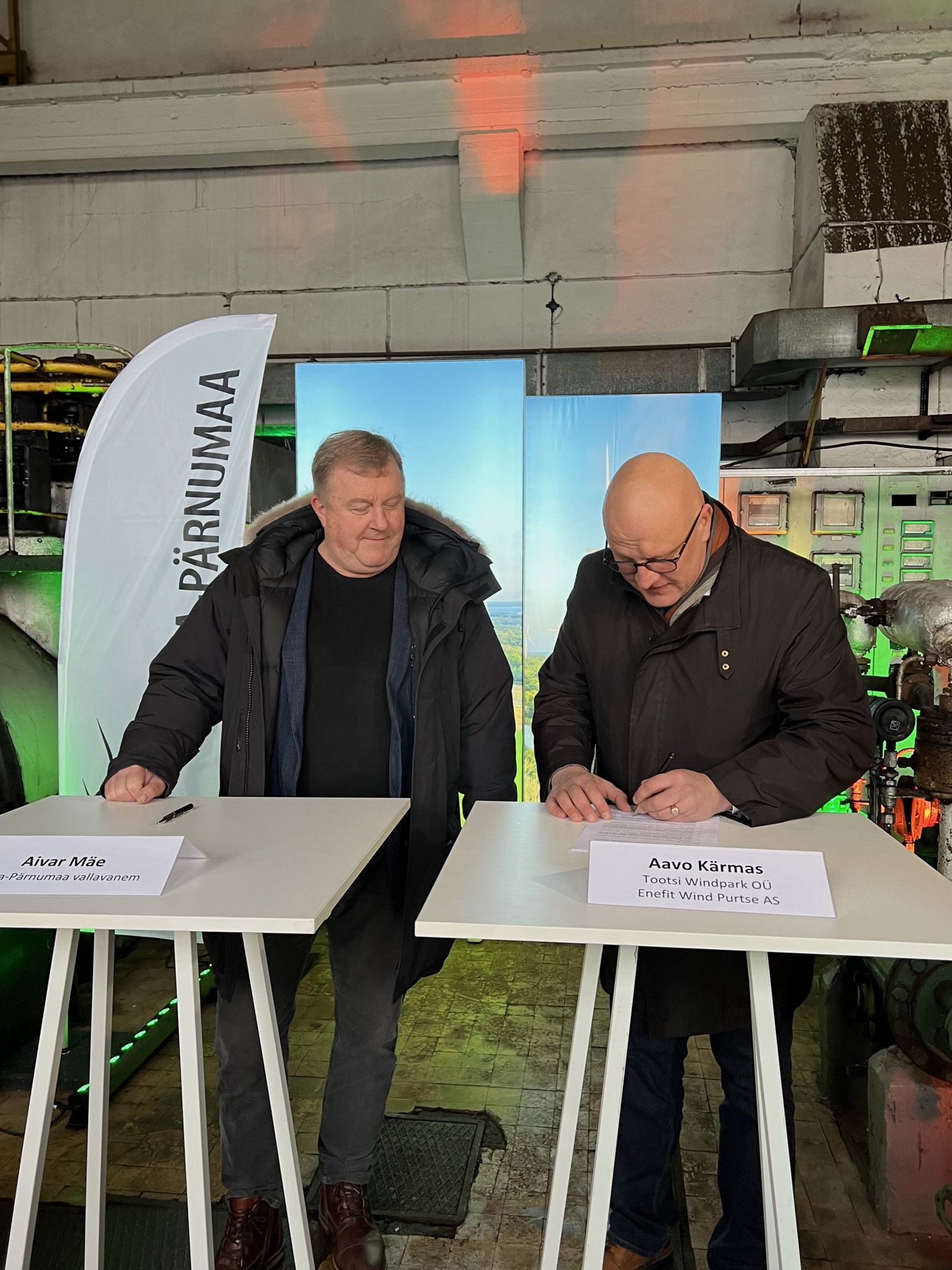 On Wednesday, January 18, Enefit Green signed contracts for the installation and long-term maintenance of the Sopi-Tootsi wind farm turbines with Nordex, one of the largest wind turbine manufacturers in the world. A good cooperation agreement was also signed with Põhja-Pärnumaa municipality.

With the agreement signed with the Põhja-Pärnumaa municipality, the parties confirmed that there will be good cooperation during the construction of the wind farm and that possible obstacles will be resolved in a friendly manner and with the goals of the project in mind. Enefit Green enables direct line, i.e. free of network fee electricity consumption for up to 20 megawatts and builds a public road through the wind park according to the plan.

According to Aavo Kärmas, chairman of the management board of Enefit Green, the construction of the Sopi-Tootsi wind farm is Estonia’s biggest investment in renewable energy production so far, which brings a significant amount of electricity to the market at a cheaper price for consumers. “We plan to build a solar park near the wind turbines, and the most powerful and modern renewable energy area in the Baltic States will be formed, which will benefit both the local community and every electricity consumer in Estonia. For a project of this scale to be successful, joint efforts of all partners and good cooperation during both the construction and energy production periods are needed,” described Kärmas.

Patxi Landa, CSO of the Nordex Group: “We are very pleased to be working with Enefit Green again. The contract for the large-scale project in Estonia is evidence of the highly competitive standard of our technology. Enefit is acquiring our latest and most powerful technology. At the same time the order is a huge demonstration of confidence in the joint partnership between our two companies.”

According to Nordex board member Patxi Landa, the company is glad to cooperate with Enefit Green. “Such a large-scale contract for the development of Estonian renewable energy production testifies to the competitiveness and high level of our technology. Enefit Green wind farm will receive the most powerful equipment. The contract is also a sign of trust and good cooperation between the two companies,” he said.

According to Aivar Mäe, the mayor of Põhja-Pärnumaa municipality, the Sopi-Tootsi wind farm is a good example of cooperation between the developer and the local government. “The expression “Not in my backyard!” is not used in this project when communicating with each other. We are talking about very affordable energy, new, comfortable rental houses and opportunities for entrepreneurs. This is the future of Põhja-Pärnumaa,” said Mäe.

Sopi-Tootsi wind farm in Põhja-Pärnumaa will be the largest in the Baltic States in terms of capacity. The park will be completed by the end of 2024 and its annual production will cover more than 8% of the electricity consumed in Estonia. In addition to the 255-megawatt farm with 38 wind turbines, Enefit Green is planning to build a solar park of 63 megawatts nearby. The solar park investment decision is planned to be made in the first half of this year.

Enefit Green is cooperating with Nordex on the construction of the 72-megawatt Tolpanvaara wind farm in Northern Finland. The Tolpanvaara wind farm with 13 wind turbines is planned to start production at the end of this year, and the estimated annual production of the park exceeds 250 gigawatt-hours. By comparison, it could cover the annual electricity needs of approximately 76,000 Estonian households.